As a level one student with a long journey ahead of me with the my photography work, getting the chance to see work by other OCA students can be so beneficial to know where my peers are and to provide some assurance not of my creativity but that I’m on the right lines with the coursework I’m producing. Getting the chance to see level 3 work in person and to see where I need to evolve to was worth the travel over as we rarely get a chance to see this.

The gallery itself was very bright, light and airy with some natural light, however the spotlights did create some glare onto the glass of the images but that seems to be a common occurrence in galleries and as a viewer you just need to adjust your viewing point. However as a photographer, I need to give consideration to positioning in exhibitions, the lighting, the type of framing method I use etc. in an attempt to mitigate this issue and to present the work in the best form that I can.

We met as a group downstairs and had some discussion on the gallery and the collection. The images we were seeing were only a small amount from a much bigger piece of work and to be honest a couple of the images didn’t quite flow with the rest and I wonder if the ones that weren’t chosen would have been better placed here. With all of the views into the subjects homes, the men on the street and the guard on the street corner seemed to be at odds with these and feel like they belonged to a different collection. However the risk of having such a small selection of images from a larger body of work is choosing the right ones to effectively show the breadth of work and also to allow the images in a smaller selection to sit together and still work.

The images were taken around the East 100th street district where photographer Bruce Davidson had originally produced a body of work in the 1970’s and his book was placed in the gallery as a reference point. The discussion later on touched on the comparison and the differences between the two captured within the same geographical area, and how the viewpoints of the two artists differ over the span of time between the two. An overall thought was that Tanya was trying to get positive side over, the changes in the neighbourhood since Davidson’s work and the pride these people have. Her images show that there is a good relationship between Tanya and her subjects, these people being photographed have welcomed her into their homes and look relaxed with her presence. I questioned whether she had posed them specifically or if they’d just chosen themselves, however one of the other members of the group had attended the private view and was able to fill us in on the fact that Tanya had asked them to be where they were comfortable, she didn’t pose them. However she had requested that they didn’t undertake any tidying up, wanting the natural view but it seems mostly ignored by the subjects, but I’m sure that’s just basic human nature when expecting a visitor or a viewer to their house.

While most of the images of the inside of the apartments flow well, and if I hadn’t been told this was an area in New York, I wouldn’t have guessed, there was one image where we feel like a voyeur watching the subjects through an open door in their kitchen, looking very natural and not posed. While she’d been welcomed in to participate, this feels as if she in an outsider, and I wonder at which point in the process that this image was taken and it bring to mind a quote I’d read by Bruce Davidson where he said in reference to his work ‘Outside Inside’, “I start off as an outsider, usually photographing other outsiders, then, at some point, I step over a line and become an insider. I don’t do detached observation."

Without any text accompanying the images, aside from an introduction, as a viewer it’s more difficult to understand and interpret what we’re seeing. 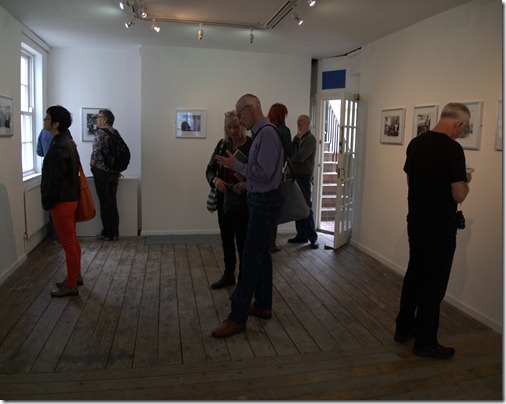 Another debate that we had was on the actual physicality of the work, while there was no argument that the images showed good exposure and technical control, they were let down by the framing. While the print sizes varied, no attempt was made to ensure that all the frames were the same size and this meant that there was no fluidity between the frames as the eye had to move up and down to match the hanging. While an attempt had been made to level the tops, the differing sizes were obviously still there and we discussed some points for choosing and hanging prints which I’ll certainly list in my journal to refer back to. 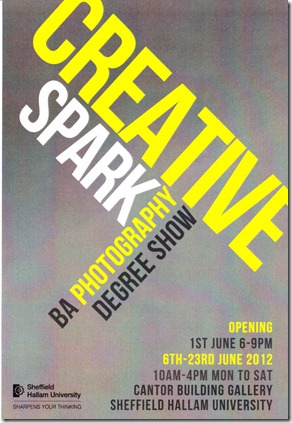 After the study visit we then walked over to Sheffield Hallam university to see ‘Creative Spark’ the BA Photography degree show. Seeing a degree show was a new experience for me so I was very interested to see what the quality of work of full time students undertaking a traditional degree would be like compared to the work I’ve seen by OCA students. First of I wasn’t expecting the high number of students to be exhibited, and secondly I wasn’t expecting the quality to be so mixed. Some specifics I was looking for more than the actual subjects of the work, was how it was presented and getting ideas for how I can present my work better when it comes to assessment. As well as the quality of work varying, so too did the presentation methods with hardbound books, soft booklet type books, large prints in archive boxes, postcards, projection and prints set together with physical props.

When looking at the content of the work, I was disappointed by the quality and as well as seeing technical flaws such portraits blown up that lacked sharpness, I was also concerned by some of the subject matter. One student had present a set of prints of animals in zoo’s and having used animals in zoos for previous work I’d submitted to the OCA, I struggled to understand why they’d first of all chosen the images they did, I felt the composition was nothing greater than a quick snap from a distance, and why she’d actually including the wires of the cage when with a good lens this can be eliminated to give a more natural image. I found that the selection entered here were images that I would have deleted on first review. I was also concerned by the British images of the tea set and of Chatsworth house, both subjects I’ve tackled before and with technical issues of missed focus and overall softness, lack of colour tones etc. I understand that it’s getting harder to come up with original ideas and takes on subjects, but if this is the quality after three years of teaching and study, I have to wonder as to the level of skill of some of the students concerned.

It wasn’t all negativity as I saw some work there that was both reminiscent of my own with the ‘Everyday Colours’ artwork by Elizabeth Colquitt. Some of the colour images I’ve taken previously would have fitted into this quite easily.

I did find it very beneficial to see different work and especially to review it with fellow OCA students and would consider seeing more degree shows next year. 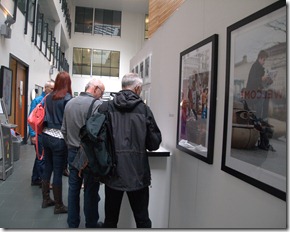 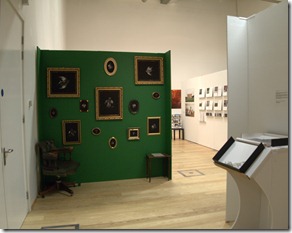 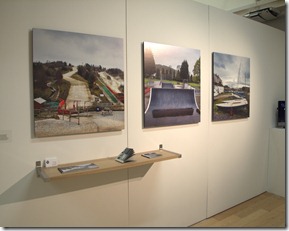